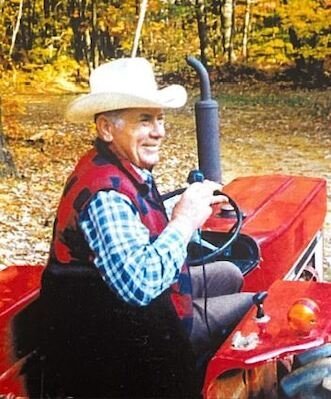 Please share a memory of Walter to include in a keepsake book for family and friends.
View Tribute Book

Born in 1932 on a farm in Rock County, Nebraska to the late George and Agnes Andersen, Andy grew up with the land in his bones. A cowboy from the start and a cowboy to the end. With pride and respect for his country, he joined the United States Marine Corps in 1951 and served until 1954. As his time in the Marines drew to an end, Andy was stationed at Naval Weapons Station Earle. As fate would have it, Andy was set up on a blind date with a young woman from Atlantic Highlands, Alice Augustine. Alice stole his heart, they were married on June 16, 1955, and the rest is history. That small-town farm boy was to build a life in New Jersey.

Using the knowledge he obtained in the service as a diesel mechanic, Andy founded and operated Andersen's Equipment Service for over 30 years. A farmer at heart, Andy obtained land and created, through his persistent work and dedication, Windmill Acres Farm. Out of Alice's love of flowers and Andy's love for Alice, Andy built a greenhouse for Alice. That one greenhouse lead to the five greenhouses and a staple business in the community for over 25 years. Not only did they sell flowers, but Andy provided narrated hayrides with a history of the farm. Andy could be seen around the farm or town in his red Ford pickup truck, often with a loyal dog by his side. The love for the land and the pride for his own slice of Heaven continued to run through him until his last days.

Never one to find a challenge or task he could not master; Andy became a novice woodworker. This curiosity turned into a full-scale assembly line and workshop as he created from his imagination hand-made Christmas presents for his family ranging from old-fashioned toy boxes with wooden hinges to intricate candy dispensers. Andy found joy in many of the little things in life. Whether strumming his guitar, reading a book or the newspaper, sipping a glass of wine, or fishing on his lake in Florida, Andy took the time that was given to him and lived it fully and without reservation. Andy was known by his family and friends to give thanks to God through wonderful blessings before a meal or at a wedding. Andy was perhaps the only person who could seamlessly turn a prayer into a "thank you" speech without losing a beat. His heart was simply too full for one thing at a time.

Andy was predeceased by his mother, father, and his beloved daughter Kristen (William) Reuter. He is survived by his best friend and wife of 65 years, Alice. He is also survived by cherished daughters: Karen (Bernie) Arnella, Kimberly (Kenneth) Greeley, and Kelly Hillmann; 13 adored grandchildren: Linar, Laura, Christopher, Jannien, Joshua, Danial, Michael, Matthew, Jessica, Lucas, Jonathan, Zachary and Kathryn; as well as 15 great-grandchildren who brought a twinkle to his eye.

Funeral arrangements being handled by Posten McGinley Funeral Home 59 E Lincoln Ave , Atlantic Highlands NJ 07716. A private Internment will take place for family only. A Memorial Service will be taking place on a future date to be announced .

In Lieu of flowers donations can be made to the St Judes Research Hospital , your local Salvation Army or Billy Graham Ministries in Walter's Memory.

To plant a beautiful memorial tree in memory of Walter Andersen, please visit our Tree Store

Look inside to read what others have shared
Family and friends are coming together online to create a special keepsake. Every memory left on the online obituary will be automatically included in this book.
View Tribute Book
Services for Walter Andersen
There are no events scheduled. You can still show your support by planting a tree in memory of Walter Andersen.
Plant a tree in memory of Walter
Share Your Memory of
Walter
Upload Your Memory View All Memories
Be the first to upload a memory!
Share A Memory
Plant a Tree