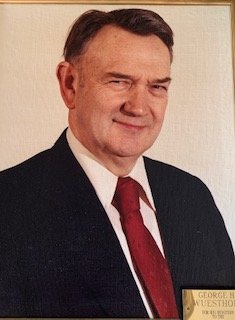 Please share a memory of George to include in a keepsake book for family and friends.
View Tribute Book

George Herman Wuesthoff, 93, of Atlantic Highlands, New Jersey, passed away on February 24, 2020 after a long illness.

George Wuesthoff was a beloved member of the community. He just celebrated his 93rd birthday. After growing up in Union City and graduating from Montclair State Teachers College, he moved to Atlantic Highlands with his bride and lifelong Atlantic Highlands resident, Alma Lindland. He later completed graduate coursework in Banking and Finance.

He was an educator at heart. He loved Children. He called them "his angels" and he knew the name of every child in his school. For seven years, he taught U.S. History, making it come alive for his students. His career turned to administration, serving as Superintendent of Schools. Throughout his career, he mentored and educated many generations of students. During the time he worked as a school administrator, he applied his extensive knowledge and gifts to develop and manage school, municipal and agency budgets. His love for community and his unyielding devotion to financial planning and management has made a lasting contribution to the town and many municipal agencies. Because of his efforts, the town has benefitted with improvements such as parks, library and harbor development. He served in political office in the Town Council and Shade Tree Commission.

In his own words, George said "we tried to live a good life of service". To all who knew him, he never lost sight of that goal. He was a loving husband to Alma; father to Lynn, Chris, and Jeffrey; grandfather to nine and great-grandfather to six.

He loved to travel with his wife Alma and together they went on many trips to England, Norway, Europe, Italy and around the United States. During these travels, they pursued their love of history celebrated their life-long love of learning. George loved baseball (named after baseball legend George Herman 'Babe' Ruth), the New York Giants, and was an avid stamp collector. He was an active volunteer at his church. His joy of life and generosity of spirit showed in everything he did.

To all those whose lives he touched, we are better for it and he will be remembered with fondness by all who loved him.

In lieu of flowers, please consider honoring George's memory by donating to the Alzheimer's Foundation of America, 1(866)232-8484, alzfdn.org

To send flowers to the family or plant a tree in memory of George Wuesthoff, please visit Tribute Store
Thursday
27
February

Look inside to read what others have shared
Family and friends are coming together online to create a special keepsake. Every memory left on the online obituary will be automatically included in this book.
View Tribute Book
Share Your Memory of
George
Upload Your Memory View All Memories
Be the first to upload a memory!
Share A Memory
Send Flowers
Plant a Tree