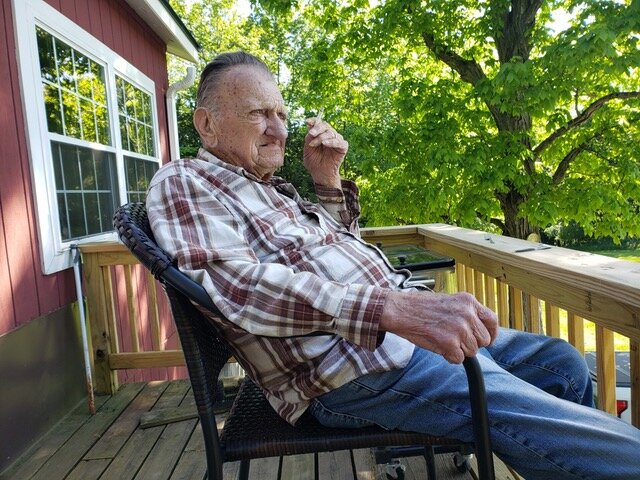 Please share a memory of John to include in a keepsake book for family and friends.
View Tribute Book

Jack, the patriarch of our family , died at home on October 22nd surrounded by his family.

Jack was born in Little Silver, NJ to Walter and Mary Sodon. He grew up on the Sandy Hook Bay. He spent his childhood in the woods and on the water.

He was always in nature. Crabbing, hunting, spending time in his garden or with his chickens.

He was a skilled wood worker and he could build anything. We all are lucky enough to have some of his creations in our homes.

Jack enlisted in the Navy in 1944. He served as a Navy Firefighter in Corpus Christi, Texas.

After serving his time in the military , he came home to begin his career as an electrician. He founded Sodon’s Electric in 1947.

Through the years, he also owned laundromats with his brother in law, Jack Hueston.

He married Carol Thoms in 1955. And built their home in Navesink, NJ. They went on to have 3 children.

Jack joined Navesink Fire Company in 1950, he served as captain and later became a life member in 1970 but remained active for many years.

In 1985 he left the family business to pursue a career as an electrical inspector. Jack inspected in many towns throughout NJ. Finally retiring at the age of 84.

In that same year, Jack & his son, Tim purchased land in Upstate New York. Jack and family built a cabin that is still used and loved by family and friends today. He loved being at the cabin more than anywhere else. This is where he taught his love of the outdoors to his grandchildren and great grandchildren.

If you were ever at the receiving end of Jack’s sarcasm, know that your were loved.

Funeral will be at Posten McKinley Funeral Home

Family and Friends will be received Wednesday, Oct 26 5pm-8pm

To send flowers to the family or plant a tree in memory of John Sodon, please visit Tribute Store
Wednesday
26
October

Look inside to read what others have shared
Family and friends are coming together online to create a special keepsake. Every memory left on the online obituary will be automatically included in this book.
View Tribute Book
Share Your Memory of
John
Upload Your Memory View All Memories
Be the first to upload a memory!
Share A Memory
Send Flowers
Plant a Tree